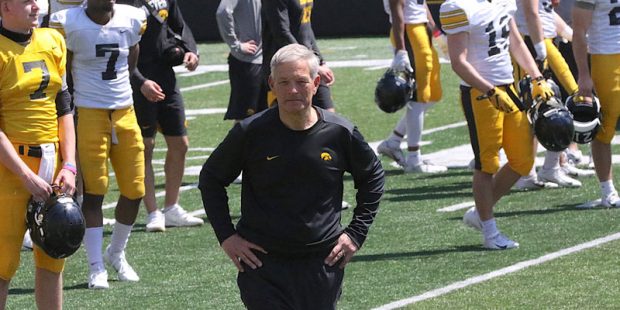 At the Big Ten media days, Iowa football coach Kirk Ferentz had some remarks about the direction of college football. This year will mark his 24th season guiding the Hawkeye program. As with many of his peers in the sport, Ferentz struggles with the changes coming to the structure of the sport. He supports players being able to pull in cash from Name, Image and Likeness (NIL) deals, but he bemoaned the lack of clarity in the regulations, which allow players to make money but do not allow colleges to “entice” recruits. Tension has roiled the sport as the transfer portal and NIL deals have motivated a number of player moves, but this is the new reality in college sports. We have another look at the preseason top 25 and some insights that may help your College Football betting this season.

Alabama continues its status as a recruiting powerhouse, as one of the best players in the 2023 class, safety Caleb Downs, has committed to the Crimson Tide. According to 247Sports’ rankings, Downs is rated at five stars and #12 overall in the class. He had received scholarship offers from Georgia, Ohio State and Clemson, as well as from dozens of other schools. He stands 6’0 and weighs 185 pounds, so his size is good for the position, but his playmaking raised eyebrows, as he had two pick-sixes during his junior season in high school but also scored touchdowns as a passer, receiver, rusher and kick returner. Scouts have him contributing most as a defender who can get things going in the secondary, whether using his instincts to come up and stop the run or using his athleticism to slow down the passing game. His father is Gary Downs, a former running back in the NFL. This signing gives Alabama 15 commits, including three five-star recruits.

Wide receiver is one of the most important positions in college football today. Most of the elite teams have go-to targets, as the college game has continued to evolve from a grinding, run-first sport to a sport where scoring happens at a much higher clip than in the NFL – and quarterbacks are looking for receivers to build chemistry with them and make big plays down the field. Oregon is a team that comes into 2022 hoping that they have found a #1 receiver in Kris Hutson. As a second-year freshman, he caught 31 balls for 419 yards and two scores. Those numbers are pedestrian until you consider that his last four games featured 18 catches for 239 yards and both of those touchdowns. The Ducks need him to produce, because the next-most productive wide receiver is Troy Franklin, who caught 18 balls last year. Miami (FL) brought in Charleston Rambo from the Oklahoma Sooners, and Rambo went off for 79 catches and 1,172 receiving yards, both school records, and he scored seven touchdowns to lead the team. However, he and Mike Harley, who broke the Hurricanes’ career reception record, are now in the NFL. Their replacements are Key’Shawn Smith and Xavier Restrepo, along with tight end Will Mallory. One or more of these players needs to make a leap in production for the Hurricanes to have a chance to contend in the ACC.