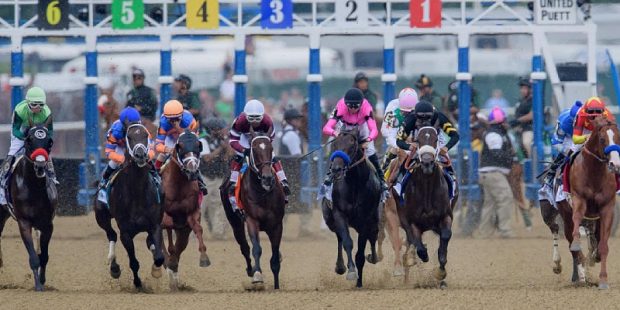 The Preakness Stakes followed form much more closely than the Kentucky Derby did this year. The sports betting community was buzzing about the possibility of another huge upset from Pimlico Race Course, but this is why the odds on long shots are so long – they pay off very rarely. At the Preakness Stakes, Early Voting paid $13.40, $4.60 and $3.60 at 5/1 odds after taking off the Kentucky Derby to focus on this race. Epicenter, the favorite, came in second – after finishing as runner-up at Churchill Downs – and Creative Minister rounded out the trifecta. What can we expect to see on June 11 at the Belmont Stakes? It’s a long way off – but we have some insights for you to your Belmont Stakes odds for consider now.

Early Voting is not expected to run the Belmont Stakes, instead looking ahead to July 23 at Saratoga. Rich Strike, who came out of nowhere to win the Kentucky Derby, will return for the Belmont as this distance is closer to what he needs; his connections had worried that the two-week turnaround between Churchill Downs and Pimlico would not be long enough, and the shorter distance of the Preakness might have resulted in him closing too late to compete.

Even after winning the Kentucky Derby, Rich Strike will not be the favorite at the Belmont Stakes – although he also won’t come in at those 80-1 odds that greeted him at Churchill Downs. He has finished in the top three in five of his last seven races, so I expect him to be a play in the trifecta, but he only has two wins in his career. Questions will surround Rich Strike – did he get lucky at Churchill Downs thanks to the fast pace? Did the traffic open for him just in time? Or is he just beginning to peak? Belmont runs 1 ½ miles, the longest of the three in the Triple Crown, but his connections think this will suit his personality when it comes to timing the kick at the end. So who will the favorite be?

Mo Donegal, who came in fifth at Churchill Downs, coule be the favorite. We the People ran the Peter Pan Stakes (a prep race for the Belmont) instead of the Preakness this weekend, and he won by more than 10 lengths. He has raced twice at Belmont Park in 2021, winning once and coming in third in the other.

Epicenter’s owner indicated that it is a “stretch” to speculate that he would run again at Belmont, despite the longer break before the third leg of the Triple Crown.

Creative Minister entered via supplementation fee and came in third. He is expected to race again at Belmont, and before the Preakness, he had never finished worse than first of second. He does not have a lot of racing experience, so the long distance and the experienced field could be too much of a challenge.

Secret Oath, who won the Kentucky Oaks and was looking to become the seventh filly ever to win the Preakness Stakes, came in fourth. However, she had a bad trip coming out and then ended up going wide when she did not really need to. With a better early race, she could have made matters much more interesting. At this point, though, she is likely to wait until Saratoga to race again.

Armagnac set the pace in the early going at the Preakness, but he faded as Early Voting and the rest of the contending field blew by him down the stretch. His connections have not yet commented on his Belmont status.

Stay tuned for more information about betting choices for the Belmont – we will keep you up to date as odds and posts emerge.