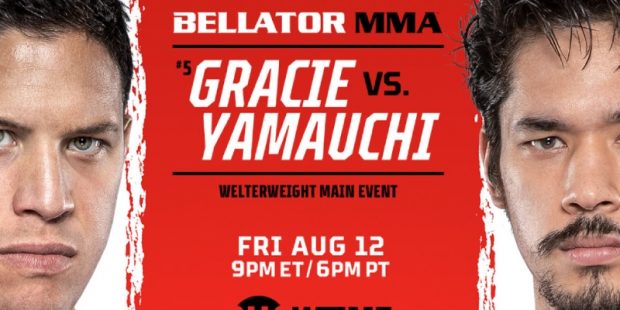 Friday night’s installment of Bellator MMA comes to us from Sanford Pentagon in Sioux Falls, South Dakota. Two submission specialists will meet in the main event, as Neiman Gracie tangles with Goiti Yamauchi in a welterweight fight. The co-main event is a heavyweight showdown between Valentin Moldavsky and Steve Mowry. We have Bellator betting predictions for several of the fights – as well as the full card.

Neiman Gracie vs Goiti Yamauchi is Gracie’s attempt to bounce back after dropping three of his last five fights. It will be interesting to see if both of them resort to striking, aware of each other’s status as a submission expert. If things stay upright, Yamauchi is the slightly better striker, assuming that his power carries over to welterweight. Gracie’s striking has improved recently, but Yamauchi has enough speed to cause Gracie some real problems. If things head to the mat, Yamauchi may be more vulnerable, as Gracie is the more creative of the two. Yamauchi had a good win in his welterweight debut, but Gracie still has more in his toolbox.

Valentin Moldavsky vs Steve Mowry will show us how Moldavsky bounces back from adversity, as his six-game winning streak in Bellator came to an end when he had a chance to win the undisputed Bellator Heavyweight title but lost to Ryan Bader. Moldavsky now has a 6-1 record in the promotion, with five wins by decision, while Mowry is 6-0 in Bellator, with all wins coming via finish. However, Mowry has mostly taken on bottom-feeders, while Moldavsky worked his way up the Bellator ladder more quickly. Mowry has been accustomed to finishing fights early, so it will be interesting to see if he has the cardio to last. Moldavsky’s forte is avoiding errors and stacking up points, one round at a time. He does not bring the sort of pressure that Mowry uses to start fights, but Mowry has the volume and the power to overwhelm Moldavsky early.

Ilima-Lei MacFarlane vs Bruna Ellen is MacFarlane’s first fight after an upset loss against Justine Kish. Now she has dropped two in a row and looks to avoid a three-fight skid against Ellen. Ellen has emerged as an elite flyweight striker, while MacFarlane looks to get fights to the ground and deliver the submission, with the armbar her usual technique. However, former Bellator champ Juliana Velasquez and Kish did not go down that way, but Ellen does not have the experience that either of those two fighters do. MacFarlane should be able to get through Ellen’s striking and post multiple takedowns and establish control.

Austin Vanderford vs Aaron Jeffrey is a key fight for both fighters. Vanderford comes in off a surprising loss, and he will represent a crucial test for Jeffrey, who has gained accolades as a prospect but has not fought anyone particularly impressive yet. Vanderford is a pressure specialist, so Jeffrey will have an early crucible to escape. I see Vanderford bouncing back and delivering a knockout.