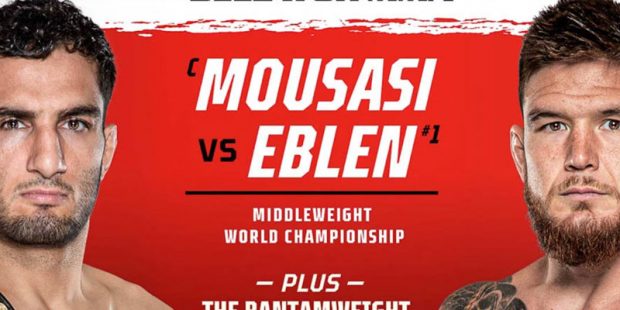 Bellator’s latest slate of MMA fights is set for Friday night, June 24, at the Mohegan Sun Arena, in Uncasville, Connecticut. The headliner is a Bellator Middleweight Championship fight, as Gegard Mousasi will defend his belt against Johnny Eblen. The evening will also feature two quarterfinal fights from the Bellator Bantamweight World Grand Prix. Fourth-ranked Magomed Magomedov will fight Enrique Barzola in one quarterfinal, while sixth-ranked Leandro Higo will fight Danny Sabatello in the other. You can catch the main card on Showtime and the preliminary fights on YouTube or Pluto TV. Check out the complete fight card along with our Bellator betting predictions for some of the key tilts.

Gegard Mousasi vs Johnny Eblen is a bout between a legend and an up-and-coming Bellator fighter. Eblen is 7-0 in Bellator, but there is still a wide gap in experience between him and Mousasi. Mousasi has finished both of his prior Bellator Middleweight title defenses with TKOs, and Mousasi has been fighting the top fighters on the planet for the last two decades. His experience keeps him calm and allows him to get the mental and physical edge on his opponent. For Eblen to win, he will need to get close and put Mousasi on the mat. The only weaknesses Mousasi has shown have come against elite wrestlers, so if Eblen is willing to stand and trade blows, he will absorb too much damage. It is also a worry that Eblen’s best victory has come against John Salter – when Salter was well past his prime. Mousasi is a much better fighter than anyone Eblen has faced in his career.

There are similarities between this bout and Mousasi’s last title defense, which came against Austin Vanderford. The challenger came in with a perfect 11-0 record, trained with American Top Team, and had a strong wrestling background. Also, Mousasi represented a huge increase in competition. Mousasi fought off the takedown, stayed away from Vanderford’s attempts to get things to the ground, and finished him in the first round. I see a similar process unfolding against Eblen.

Leandro Higo vs Danny Sabatello could represent big problems for the seeded Higo, as Sabatello is a former Division I wrestler training with American Top Team. He has a 209 UFC record, having beaten Jornel Lugo and Brett Johns, wrestling them throughout the whole fight. Higo needs to stay up on his feet, bring pressure and take advantage of Sabatello’s comparative weakness in the striking game. He could also grab a submission from his back, but I’m going with the wild-card entry here and taking the value.

Magomed Magomedov vs Enrique Barzola might turn out to be the top fight on Friday night. Magomedov relies on pressure in the grappling game but has also improved with his striking later. Barzola likes to bring volume in the striking game and recently moved to Bellator from UFC. Barzola has started with a 2-0 record in the promotion, while Magomedov lost his last fight against Raufeon Stots. Magomedov must get the fight to the ground to win, so that he can get enough points with takedowns to counter the points Barzola will get with striking. Magomedov has the experience to fight through the striking and win on the cards.