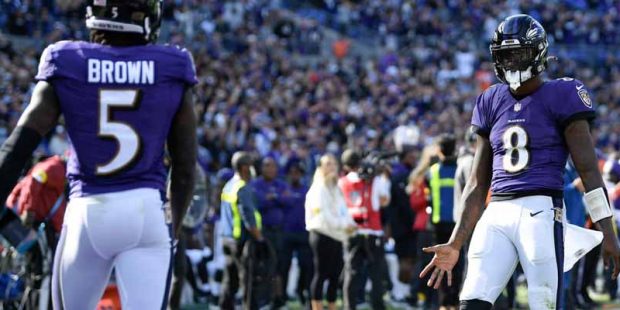 Last year, the Baltimore Ravens missed the playoffs for the first time in four seasons. Quarterback Lamar Jackson only played in 12 games because of injuries, and starting tailback J.K. Dobbins blew out his ACL in the preseason and ended up missing the whole year. Rookie wide receiver Rashod Bateman only played in 12 games due to injuries as well. In the off-season, the Ravens did well, picking Notre Dame safety Kyle Hamilton and Iowa center Tyler Linderbaum in the first round. They also got edge rusher David Ojabo out of Michigan, but he tore an Achilles tendon in training before the draft, so he is a long-term prospect at best.

How will the Ravens do this season? We have Online NFL betting picks for each of their 17 games.

It’s hard to imagine a much easier start to the season without sending the Ravens into the Big Ten. The Jets have some new pieces on defense, but the Ravens’ pass rush should be able to get all over Zach Wilson. 1-0.

Tua Tagovailoa – to – Tyreek Hill might become a thing this season, but it will take some time to develop. The Ravens have the offense to turn this game into a grinder and control the rhythm. 2-0.

The Ravens will control both lines in this game and wear the Pats down. 3-0.

The Bills will be the first team the Ravens have faced this season that can shut them down with their defense, and Josh Allen should be able to evade the rush and deliver big plays for the Bills. 3-1.

The Ravens should be able to get some revenge for that sweep the Bengals dealt them last year, as long as everyone is still healthy at this point. 4-1.

How long will the Giants be rebuilding again? 5-1.

This could have been a great game: Lamar Jackson vs Deshaun Watson. However, it’s more likely to be Jackson vs Jacoby Brissett, which will not go well for the Browns. 6-1.

A short travel week means less preparation and more stress. Also, the Buccaneers have an elite pass rush and a fairly solid quarterback of their own in Tom Brady. 6-2.

Lamar vs Jameis? Yes, please. The Saints might have an even more dynamic offense than the Buccaneers do. 6-3.

Carolina could have moved on to Matt Corral at quarterback by this game. Either way, the Ravens should roll. 7-3.

Another week against a rebuilding team should mean another big win. 8-3.

Russell Wilson brings a fairly complete Denver team to Baltimore, but the Ravens should have the defense to keep this in hand. 9-3.

I’m not sure Mitch Trubisky (if he is still the quarterback) can negotiate the Ravens’ pass rush. I’m sure that Kenny Pickett (if he has the starting job by now) can’t. 10-3.

This seems like a potential trap game to me. Brissett should have a handle on the Cleveland offense by now, and the Browns still have Nick Chubb and Kareem Hunt to pound the ball. 10-4.

It does seem like the Ravens get to play a lot of teams with unstable quarterback situations, doesn’t it? 11-4.

The Ravens complete the sweep, although the Pittsburgh defense makes it interesting. 12-4.

These two teams meet for the AFC North, and the Bengals take the W. 12-5.