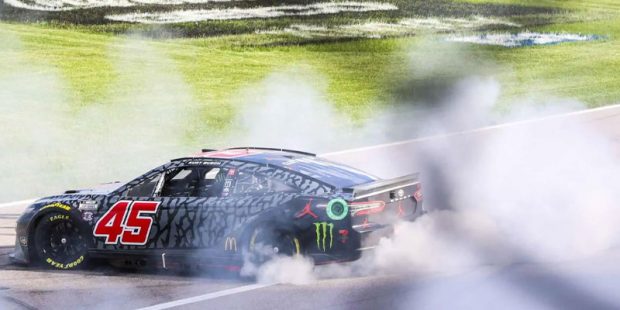 Last week, Chris Buescher became the 19th different winner in a NASCAR Cup Series race this year, holding off Chase Elliott for the last 50 laps of the Bass Pro Shops Night Race at Bristol Motor Speedway on Saturday. This was the race that trimmed the field to 12 for the Cup Series playoffs, eliminating Kevin Harvick and Kyle Busch. Buescher ended up leading the last 61 laps (and 169 overall) to win a race for Roush Fenway Keselowski for the first time since Daytona on July 1, 2017. Now the series has three straight non-Playoff winners, which has never happened before. Buescher ended up winning by a scant 0.458 seconds, with William Byron, Christopher Bell and Kyle Larson rounding out the top five. This week, the playoffs continue with the AutoTrader EchoPark Automotive 500, set for Sunday afternoon at Texas Motor Speedway. The race starts at 3:30 pm Eastern time, and the broadcast will be on USA Network. We have the NASCAR betting odds for each driver as well as wager card suggestions.

Kyle Larson won the last official event at Texas Motor Speedway, back in the fall of 2021, leading more than half of the 500 miles. He also won at TMS in the 2021 All-Star Race. The 2022 racing package is different, but adding 70 horsepower and taking a few inches off teh spoiler won’t make that much difference.

Denny Hamlin almost won at Darlington and Kansas, and he could break the streak of non-playoff winners at TMS. If you’re doing fantasy sports as well, you might steer clear of Hamlin, because he did not pick up a lot of “hog points” (points for laps led and fastest lap).

Kyle Busch has had a pair of engine failures and a speeding and spin problem in his last three races. He just got knocked out of this year’s playoffs. However, Texas Motor Speedway has brought him redemption in the past, as in 2020, when it looked like he would go a year without winning a race for the first time since 2004, but he got the win at TMS in the fall race.

Christopher Bell has the top Dietrich Data score – a metric that calculates ideal finish based on driver performance – at ovals since the May Dover race. Bell stays below the radar because he doesn’t have that many wins, but when you have 19 winners in one season, no one is grabbing the checkered flag all the time.

Chase Elliott is one of the streakiest drivers in the sport right now, and he just came in second at Bristol. If he’s heating up, this Cup Series trophy could end up in his case.

Ross Chastain has not kept up with the top drivers lately; in the last three races, he has not stayed with the top five for over 20% of the laps. He doesn’t have as much speed in his car, but he did crack the top ten at Bristol and Kansas thanks to savvy driving.

Ryan Blaney won the 2022 All-Star Race in Texas, so he has had success on this track. So has William Byron, whose crew chief, Chad Knauss, helped him with setup. He changed to Rudy Fugle, who has led several drivers to wins at TMS in the Camping World Truck Series.