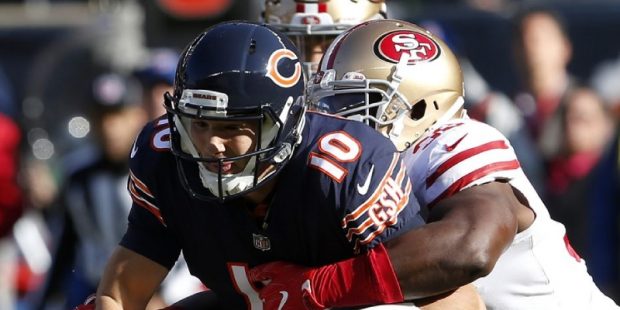 Did you know that, just four seasons ago, the Chicago Bears went 12-4 and won the NFC North? That was in coach Matt Nagy’s first season, and it was Khalil Mack’s first year as a defensive star on the Midway. Things have definitely regressed since then, as the Bears only won 22 games over the next three seasons. Quarterback Mitch Trubisky has bounced to Buffalo and now to Pittsburgh, and Mack is long gone as well. The team’s offense is now in the hands of Ohio State phenom Justin Fields, but the talent level is negligible going into the season. The Bears start the Matt Eberflus era this fall, with a visit from the San Francisco 49ers. The Niners ran all the way to the NFC Championship last year, where they fell to the L.A. Rams. Despite that terrific postseason, San Francisco is moving on to Trey Lance at quarterback (although they still have Jimmy Garoppolo on the roster, in a bizarre failure to move a valuable asset). San Francisco comes into this game as a seven-point road favorite. Which way should you go with your NFL betting here? Read on for our perspective.

Why should you bet on the 49ers?

Lance has the confidence of coach Kyle Shanahan despite the fact that he has only attempted 71 passes in regular-season NFL action. Deebo Samuel had his contract demands met, and he has returned as one of the great offensive threats. Tailback Elijah Mitchell needs to carry more of the load this year in the running game so that Samuel does not also have to appear in the backfield so often.

San Francisco has won four of its last six games away from Levi’s Stadium and has covered the spread in four straight road games – and in five games in a row overall. The Bears have only covered the spread three times in their last 12 games overall. Some issues that the Bears face include a porous offensive line and a lack of elite talent on offense beyond the presence of Fields himself. If you like San Francisco here, you see Lance continuing to show the promise he demonstrated in the preseason, and the Bears failing to do much on offense at all.

Why should you put your money on the Bears?

There is a youth movement underway in Chicago, which means potential excitement in the future – but also potential chaos for now. Soldier Field has not been kind to the Bears as of late, as they have dropped five of their last six games at home. In 2023, Chicago will have a ton of space under the salary cap, but this will be the year when we learn about Fields. The O-line was already iffy, and the number of talented weapons was already dwindling before injuries hit N’Keal Harry, Velus Jones Jr and Byron Pringle. The Bears did rank sixth in total defense last year, but with less talent on offense, the defense will have to spend more time on the field.

Interestingly, the “under” has paid off in seven of the 49ers’ last eight games and in 20 of the Bears’ last 27 games at home. The point total here is already fairly low for an NFL game, but given the fact that we have two basically new quarterbacks and two stout teams when it comes to defense, this should be more of a grinding game.

Both of these quarterbacks have high ceilings, but I think San Francisco has put more around Trey Lance to help him succeed initially. I predict a final score of San Francisco 23, Chicago 13. I’m more confident about the “under” than I am about the 49ers covering that big spread, though.