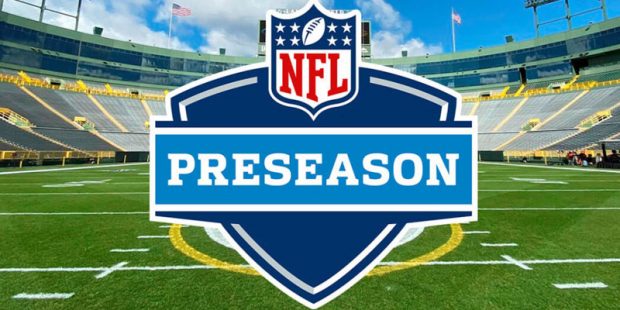 The NFL’s preseason only runs three weeks now, so the midpoint of this year’s exercises in futility is upon us. These games tend to be quite volatile, for a number of reasons that range from different coaches’ perspectives about the competitive importance of the outcomes to the desires to keep game plans simple and basic (so that other teams can’t see true packages on film until the regular season begins) to the desire to keep starters healthy. Last week, scoring was plentiful in the preseason, but will it be in Week 2? We have your NFL betting picks for the Friday night action.

Did you know that the New England Patriots have only lost four preseason games since August 31, 2017? Did you know that the New York Giants don’t just own the Pats in the Super Bowl but also own them in the preseason, having taken three of those victories? Bill Belichick isn’t necessarily focused on stacking up wins that don’t count, but he is an elite practitioner of corrections from one week to the next. The execution in New England improves every week, which means that even when the Patriots don’t have the better roster, they usually have the better execution.

The Carolina Panthers are an interesting team primarily because of their newest addition at quarterback. Watching Sam Darnold try to find his groove in the NFL sounds like it is becoming a futile exercise, but when the Panthers picked up Baker Mayfield from the Browns, memories of him leading Cleveland to a wild-card playoff win in Pittsburgh and then to the brink of a divisional playoff win in Kansas City should have Panthers fans excited. However, the rest of the Panthers’ roster is still a work in progress. New England to win and cover.

In the last eight years, the Saints have only finished with a better record than the Packers twice. However, the Saints won the last matchup between these two teams, going back to Week 1 of the 2021 regular season. Green Bay was supposed to head to the Superdome, but damage from Hurricane Ida forced the game east to Jacksonville. The Saints rolled to an inexplicable 38-3 shellacking, after which Aaron Rodgers found his footing and led the Packers to another NFC North title.

The Saints have Jameis Winston back, and they also have Michael Thomas back. Those two are hungrier for redemption than the Packers are likely to be, and given Aaron Rodgers’ disdain for playing in preseason games, it remains to be seen how hard the Packers will push. The Saints are looking to dethrone Tampa Bay in the NFC South standings after sweeping the Bucs in the regular season last year but missing the postseason. In a regular-season matchup, I would like the Packers to get revenge, but I think a lot of the Green Bay side will be going through the motions. Saints to cover.

Davis Mills did much better than expected in Houston last year, but it’s still a stretch to suggest that he should be leading an NFL offense. Brandin Cooks helped Mills out a lot with his receiving. The problems for the Texans come on the offensive line, which will have major problems with the Rams’ crew, led by Aaron Donald. The Texans also don’t rush the passer very well, and when Matthew Stafford has time to sit in the pocket, bad things happen to the opposing defense. Even if the Rams play their reserves most of the game, it’s hard to see the Texans beating them on the road. Rams to win and cover.