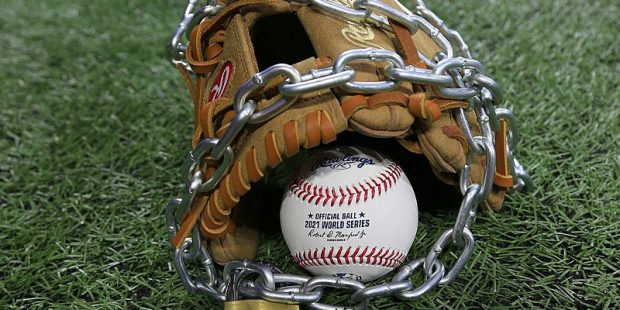 So far, the Major League Baseball lockout has cost the regular season 91 games – or two series. That doesn’t sound like a lot over a 162-game campaign, but if you’re the Texas Rangers, for example, you already have lost your only home series with the New York Yankees – which could actually bring relief, given the big bats New York has. The Yankees also had their series in Houston taken away, which keeps the Yankees from having to face an elite Astros team on the road in the regular season. At the end of the season, if division and wild card battles come down to a game or two, as they usually do, losing these early series could make a big difference – one way or the other. We were going to write an article today about the first matchups in spring training, but since we don’t have set dates for those yet, instead we have an update on the lockout, to help you with your MLB Odds planning for a sport in turmoil.

MLB News: Update on the Lockout

On Sunday, the MLB Players’ Association delivered a written proposal for a new collective bargaining agreement. The union backed down a bit on their ask for a pre-arbitration bonus pool, reducing it by $5 million, but it kept in place the competitive balance tax proposal, which is designed to keep teams who might otherwise fail to spend money on salaries do so in order to put a competitive team out onto the field. In the past, there has been a significant disparity between the spending that contending teams have done and the spending that other teams have done, resulting in teams that basically enter the regular season with no shot at a title.

Both sides continue to argue back and forth, with the owners claiming that the proposal was a step backwards, but with the players countering that they have made concessions on a number of the issues, including dropping any alterations to free agency as well as Super 2 expansion. They have also made concessions in playoff expansion, which the players view as a dilution of the importance of the lengthy regular season. The players want a competitive balance tax to start at $238 million, going up to $263 million over the course of five years, while the owners want to start at $220 million and expand to $230 million over the same time period. The pre-arbitration pool request is now $80 million from the players, while the owners last offered $30 million.

Another concession that the union made in their Sunday proposal was the time required to implement changes in rules within three areas: the size of the bases, a pitch clock and the shift. In the previous collective bargaining agreement, MLB had to provide a year of notice to the union in order to put unilateral rule changes into place, but that period is now just 45 days (just for those three areas in the rules). This new time frame would come into effect for the 2023 season.

The owners remain short-sighted in these negotiations; even if they come out of this process with slightly more money, the collective wealth among MLB ownership turns those gains into a rounding error. We’ve seen this sort of penny-pinching before, like when the Oakland A’s dropped minor league salaries from $400 to $300 per week during the COVID-19 shutdown. Even if the owners force some more concessions, the image of the sport will suffer. Making a major concession in the competitive balance tax would get the players on board – and it would also make the sport more entertaining.

Currently, teams are incentivized to lose, so that they can get top draft picks in the subsequent draft years, and then they are incentivized to keep those top prospects in the minor leagues well past when they are ready for promotion so that they can wait to pay them more money. One example is Adley Rutschman, whom the Baltimore Orioles drafted first overall in 2019. He’s the best catcher in the organization, but the Orioles want to maintain control over his contract and keep his pay low, so it is likely that they will not let him debut in the major leagues until he is 24 ½. That’s bad for Rutschman’s career, and it’s bad for the sport.

The hope is that ownership will find a way to get past its shortsightedness and get the game up and running, for sports bettors and baseball fans alike. The more damage the sport’s image takes, the harder teams will struggle to build interest.