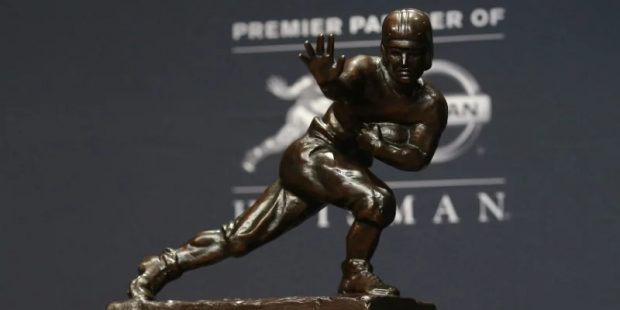 Bryce Young returns after his freshman campaign as the defending Heisman Trophy winner, and the Alabama quarterback stands in second place on the College Footbal betting odds list to win it again this season.


C.J. Stroud went off for six passing touchdowns and 573 yards in a Rose Bowl win over a Utah team that was known for its defense. He starts at quarterback for the second season, and the Buckeyes’ offense has stacked up more than 40 points per game each season dating back to 2017. He averaged 10.1 yards per attempt in 2021, second among all FBS quarterbacks, and he starts the season at home against Notre Dame and finishes against Michigan, so he will get plenty of national-television buzz.

No Alabama quarterback had ever won the Heisman Trophy before Bryce Young did it last year; the Crimson Tide had been known for the running game in the years before Nick Saban, so not even the great Joe Namath could snag that trophy. He threw for 421 yards and three scores to beat Georgia in the SEC Championship and now has the chance to become the second repeat Heisman winner since Archie Griffin won it in 1974 and 1975.

Caleb Williams joined the Heisman buzz for a short while after he took the starting job at Oklahoma last year. He transferred to USC, following head coach Lincoln Riley. He can make laser-beam throws while on the run, and he averaged 9.2 yards per pass attempt and 5.6 yards per carry. Moving to the Pac-12 means that Williams will have to have huge games each of the 12 weeks to get consideration, as no Pac-12 player has taken home the Heisman since Marcus Mariota did it in 2014.

Ricky Williams was the last Texas Longhorn to win the Heisman Trophy, but Bijan Robinson could end that drought. He accounted for 1,422 all-purpose yards from scrimmage and found the end zone 15 times. Over the last two years, he has averaged 6.5 yards per carry. If Quinn Ewers(who graduated early from high school, missing his senior season, so that he could take advantage of NIL deals and go to Ohio State a semester early, only to then transfer to Texas) has never played a down of college football but somehow is on this list) could win the starting quarterback job at Texas. If he does, that could put more of the offense’s emphasis on Ribonsin, and if he can survive Alabama in Week 2, Robinson could be an intriguing non-QB pick.

Will Anderson is widely described as the best football player in the nation at the college level. In 2021, he led the country with 17 ½ sacks and 34 ½ tackles for loss. His edge-rushing talent is elite, and he is likely to be the top pick in next year’s pro draft. Can he match or exceed those numbers this season? How can he get even more buzz? Well, Derrick Thomas unofficially posted 27 sacks at Auburn 34 years ago. Could Anderson approach that level with double-teams coming his way all season?