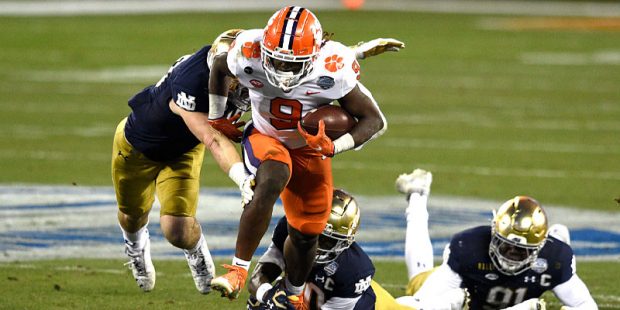 The Clemson Tigers fell back to earth in 2021, as Pitt beat Wake Forest in the ACC Championship. The Tigers did finish 9-3, but losses at North Carolina State and Pitt sealed their fate in the conference. Pitt had quarterback Kenny Pickett leading the offense, but he left for the NFL. Can Clemson take back its leadership role in the conference, or will another team take the title this year? We have some fearless predictions for the conference that may help shape your NCAAF betting choices.

Pitt has to find a replacement for Pickett at quarterback. Miami, on the other hand, has quarterback Tyler Van Dyke returning, and he is on the shortlist in the preseason for ACC Player of the Year. The Hurricanes had the 16th best freshman class and the eighth best transfer class; of the 11 transfers, many of them will take starting positions.

Mario Cristobal comes from Oregon to take over the head coaching job; the team also lost offensive coordinator Rhett Lashlee, who got the head job at SMU. As a division, the ACC Coastal has four coaches in their first year, with North Carolina, Pitt and Georgia Tech the only programs with returning head coaches.

Miami’s ACC crossover games are Florida State and Clemson, and they host Pitt and North Carolina. The Tar Heels also have to replace a quarterback, as Sam Howell – the top passer in the history of the school – is now gone. North Carolina has beaten Miami three straight times, but the Hurricanes are in a strong position to take what looks like a vulnerable division.

Brent Venables left a vacancy at defensive coordinator when he headed west to take the head coaching gig at Oklahoma. Even with Venables gone, the Tigers’ defense will be the strength of the team. In ACC play, the Tigers only permitted 14.8 points per game, and Bryan Bresee and Myles Murphy return on the D-line, along with safety Mukuba and Trenton Simpson.

As with last year, the major questions are on offense. Will the O-line do a better job opening holes and providing pass protection? Is D.J. Uiagalelei ready to lead the offense? As a sophomore, he struggled in his first year as the starter. This time around, he has freshman Cade Klubnik fighting with him for the job.

Wake Forest will challenge Clemson again but will fall short

Quarterback Sam Hartman is back to lead an offense that put up 41 points per game in 2021. Wide receiver Jaquarii Roberson left for the NFL, and tailback Christian Beal-Smith transferred to South Carolina. However, with wide receiver A.T. Perry (71 receptions in 2021) returning, the offense should still be productive. Defensive coordinator Brad Lambert comes from Purdue to shore up a unit that permitted 31.2 points per game in ACC play. The toughest road date on Wake Forest’s conference schedule is a trip to North Carolina State.

Geoff Collins will be out after this season

The Georgia Tech head coach has led his team to a 9-25 record in three seasons, and now Jahmyr Gibbs has transferred to Alabama. Dontae Smith returns, though, and Hassan Hall transfers in from Louisville to carry the ball. The quarterback situation is up in the air, as Zach Gibson transferred in from Akron to compete with Jeff Sims, who underperformed in 2021. The defense permitted 33.5 points per game last season, so improvement is needed on that end. There’s just too much to fix in one season, and programs often lose patience after that fourth disappointing year.